It is policy of Wellington Livestock only to purchase cattle that are “fit for human consumption” Under the Export Control Act, the Prevention Of Cruelty To Animals Act and the National Animal Welfare Standards at Livestock Processing Establishments Preparing Meat for Human Consumption, the company has to take into consideration its legal and moral obligations regarding the welfare of animals

Every animal presented for slaughter by Wellington Livestock is inspected before slaughter by a Government Veterinary Officer. During this inspection the Veterinary Officer will segregate obviously diseased animals for further examination or if they deem that an animal is not “Fit For Human Consumption” it will be immediately destroyed and sent off the plant to a knackery. the reasons that animals may be condemned before slaughter include:

After ante-mortem inspection the animals are presented for slaughter. Each animal that is presented for slaughter is inspected by a Government Inspector. Once this inspection is complete the Inspector will make the decision on the suitability of the animal for human consumption. Carcasses are condemned where the disease is considered to be extensive and the body is affected.

The most common reasons for carcasses to be condemned at Wellington Livestock are:

In the above cases the condition would have to affect the whole carcass, not just the carcass part.

Cancer of the eye is a disease condition often found in white faced beef cattle. This disease is a major cause of cattle being condemned as unfit for human consumption by Government Inspectors

Animals or Carcasses are subject to condemnation for eye cancer if:

Emaciation refers to animals that are so lean or wasted they are unfit for human consumption. It is a condition that may cause condemnation.

Emaciation can also be caused by disease (i.e. cancer) where the animal declines to eat because of illness or interference with the digestive system. In all instances of emaciation the following characteristics are present: 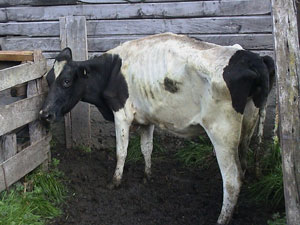 Wellington Livestock personnel are available to discuss any condemnation with suppliers, particularly with regard to any of the examples listed above. We Value your business and wish to resolve any difficulties or misunderstandings that may occur.